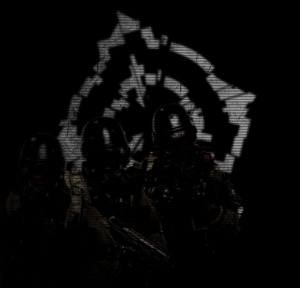 The Chaos Insurgency as they appear in the loading screen.

The Chaos Insurgency are a splinter group, antagonistic to the Foundation. It is theorized that they started the breach and capture the player at Gate A.

This faction is mainly built on scientists and guards of the SCP Foundation that, in 1924, went A.W.O.L. (Absent Without Official Leave) with several SCPs that could be vital sources of information to the Foundation.

At Gate A, four Chaos Insurgency operatives will be encountered by the player. They will warp right in front of D-9341 then warp him away quickly. This is most likely the work of the "Staff of Hermes", an item in the Chaos Insurgency's possession capable of warping the physical and chemical properties of any matter it touches.

It is also mentioned in the Gate A ending audio that the tunnel collapsed, which could be the work of the "Bell of Entropy", an object that can cause a variety of destructive effects depending on where it is struck. The Chaos Insurgency will then abduct the player for unknown reasons.

Both Dr. Maynard and Security Agent Skinner are CI agents posing as members of the site the game takes place in. They are responsible for SCP-106's first breach and are indirectly responsible for causing the site-wide containment breach.