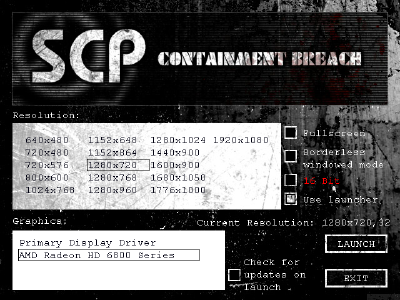 The launcher is the first window to appear when you boot up the game. It allows you to select the resolution of the game's resolution and a video card. It also has options for toggling fullscreen, borderless windowed mode, 16-bit graphics (32-bit is default) and whether the launcher should appear the next time the game is launched.

At the bottom of the window, the option to enable the auto-updater is present. When this is enabled, the game will check to see if any new version of SCP - Containment Breach has been added to the official site and will attempt to download it automatically.

In v0.1.1-0.1.2, you could select an Audio Driver from this window as well. This has since been removed. 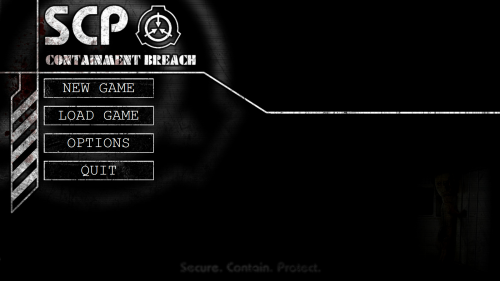 The Main Menu is the screen that appears after the launcher. A flickering image of SCP-173 can be seen at the bottom right along with the quote "Secure. Contain. Protect.", the motto of the Foundation, at the bottom center.

At random intervals small pieces of splash text flicker on the screen for very brief moments of time. The splash texts that can be seen are as follows:

Clicking on New Game will open a submenu in which the player can create a new file as well as modify several different attributes of the file.

These include naming the file, setting the difficulty, toggling whether or not to skip the intro sequence and start straight at SCP-173's containment chamber, and inputing a random seed. The field for inputting a seed will contain one of the defaults seeds upon opening the submenu.

The default seeds are as follows:

Clicking on Load Game allows you to load a previous save if your game already has one. It'll display the file's name and the last date you performed a quick save.

You can also select any saved custom maps from the Map Creator here. 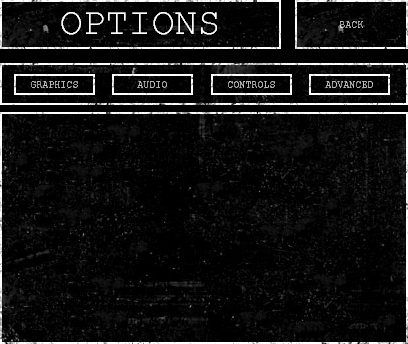 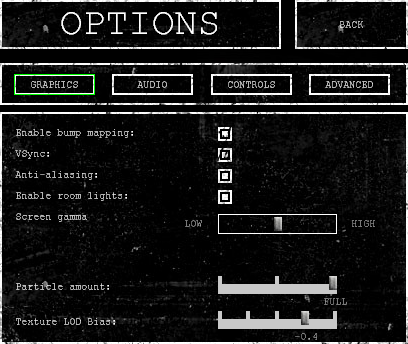 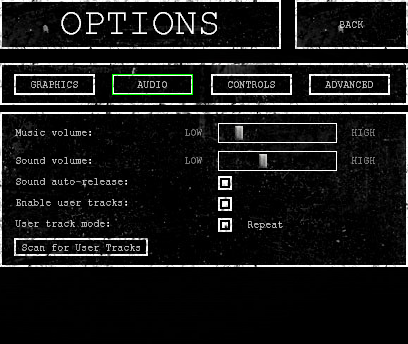 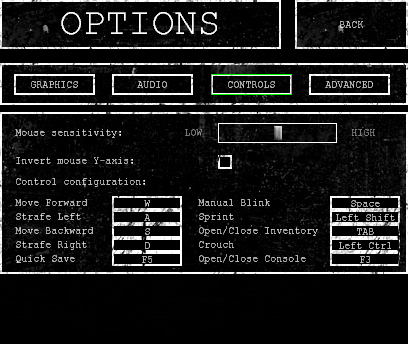 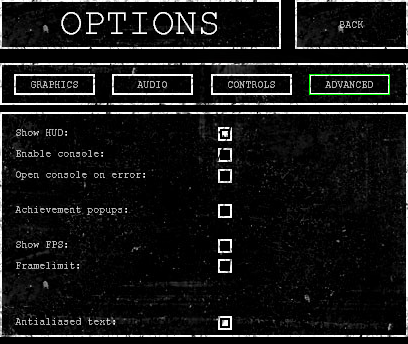 Select any tab to view them.

Clicking on Options allows you to configure the game's settings. It is divided into four tabs: Graphics, Audio, Controls, Advanced. The settings that can be modified include:

These options can be accessed later in the pause menu.

The pause menu's function is self explanatory. It displays the current file's name and its seed and allows the player to return to the main menu.

In v0.8-0.9, the pause menu contained a QR code hidden in the background of the SCP logo. Reading it would output the following:

"Remain in what you are, the center of your life
You made it to this point, no one can tell you how
You crawled and bled all the way but you were the only one
That was tearing your soul apart, you finally find yourself"

The text is an excerpt from the song "Vacuity" by the band Gojira. 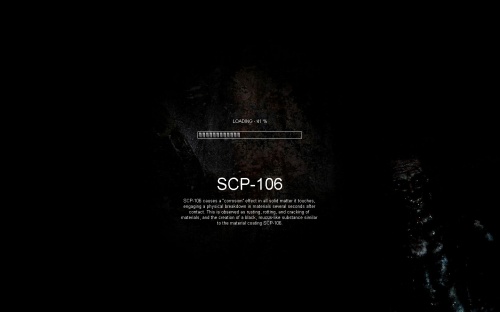 Upon starting a new game or restarting after dying, a loading screen will appear. Here, a randomly chosen image of an SCP or character from the game will pop up along with information about the subject in the image.

When this loading screen is triggered, SCP-990 will start to talk to the player. Each time this screen appears, one of the following lines will appear, scrolling among various random symbols and characters.