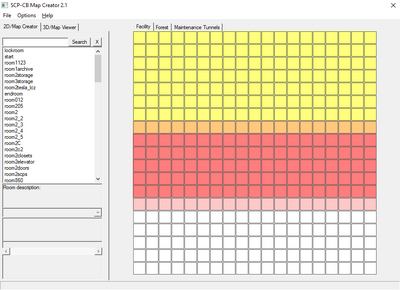 The map creator, without a loaded map.

The editor is divided into two separate sections. The main section is represented by a grid, with each square representing a room. The grid is divided into three colors to represent the respective zones: white for the Light Containment Zone, red for the Heavy Containment Zone and yellow for the Entrance Zone. A pink row and an orange row represent the checkpoints between the zones. When a room is placed, it will be represented by a shape inside the square depending on the type of room; rooms with two entrances/exits are represented by a rectangle with two openings, rooms that have a 90º turn will be a smaller square with two openings on adjacent sides, and so on. At the top of the grid are three tabs which allow the user to switch between editing the configuration for the main facility, the maintenance tunnels and the path through SCP-860-1. The maintenance tunnels use an all-white grid of the same size as the main facility's, whereas SCP-860-1 uses a grid with squares that are four times as large.

The left-hand sidebar has two tabs which will allow the user to switch between editing the map and viewing it in 3D. The sidebar displays a list of every room in the game, more specifically every room listed in SCP - Containment Breach/Data/rooms.ini. Underneath the list are a short description of the selected room, and a drop-down menu which will allow the user to select an event. Below the drop-down menu are a description of the selected event, as well as a slider which allows the user to adjust the probability of the chosen event happening.

The user can place rooms by selecting one from the left-hand sidebar, then left-clicking a space on the grid. Right-clicking on a pre-existing room will delete it from that space.

Left-clicking a room on the grid will bring up a box below it. Here the user is able to adjust the room's rotation or modify which events can occur in addition to the probability of the event occurring, should the event type allow it. For instance: the user can choose whether or not SCP-106 will traverse in the grated hallway, or the likelihood of SCP-173 spawning in a certain lockroom. It is also possible to rotate a room by selecting the room on the grid and then left-clicking in the desired direction they wish to rotate it. The user can also click-and-hold then drag to rotate the room.

It should also be noted that the user must click the "Deselect" button after selecting a room from the sidebar before attempting to edit a space on the grid, otherwise they could end up overwriting the room.

All custom maps are able to be accessed from the "Load Game" menu.