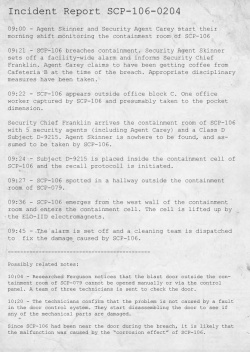 Before the events of the game take place, several of the Foundation's sites and sectors were attacked, which caused several Euclid and Keter SCPs to be temporarily relocated to an unspecified site until repairs on the previous facilities are completed. Not much is known about this site aside from the fact that it was previously used as a research facility, making it unable to handle the quantity of SCPs it currently possesses. Shortly after, Mobile Task Force Epsilon-11 ("Nine-Tailed Fox") was established in order to protect this site and handle containment breaches.[Notable MTFs Document]

Sometime after this, Dr. Maynard and Security Agent Skinner both join the unspecified site. They are working undercover as Chaos Insurgency operatives while posing as Foundation members in order to trigger a containment breach. At this point Dr. Maynard and the Engineering and Technical Services Department initiate a concept called the Modular Site Project. This project is intended to be a redesign of both the facility's layout and its security systems in order to accommodate the workload and containment chambers of the newly relocated SCPs. Throughout SCP - Containment Breach, several computer monitors can be found pointing out problems and security risks caused by the Modular Site Project, which leads to the presumption that Dr. Maynard started the project in order to make the site more vulnerable to containment breaches.[Hooper Monitor] [Office Monitor]

On an unknown date at 9:00, Agent Carey and Security Agent Skinner begin their morning shift of monitoring SCP-106's containment chamber. Between that time and 9:21, Carey leaves to go get coffee from the cafeteria.[Incident Report SCP-106-0204]

While Carey is gone, Agent Skinner uses this opportunity to release SCP-106 from containment. He sets off the site-wide alarm and informs Security Chief Franklin of the breach. Skinner then sends a message to Dr. Maynard saying, "It's out.", referring to SCP-106. He then presumably flees the site while its staff are dealing with the breach.[Dr. Maynard's Monitor]

Dr. Maynard replies, "Proceeding." and heads down to Heavy Containment Zone where he slips into the control room of SCP-079's containment chamber. He then gives SCP-079 access to every major system in the site. When 079 questions Dr. Maynard about this, he responds "You're free now. Free to give the ones who imprisoned you what they deserve." Maynard then flees the containment chamber.[SCP-079's Control Room Monitor]

SCP-106 is eventually re-contained with a lure subject and Agent Carey is disciplined for having left his post. The site then presumes that Agent Skinner was abducted by SCP-106.

Half an hour later Researcher Ferguson notices that the blast doors in SCP-079's containment chamber have begun to malfunction. The site assumes that this was caused by SCP-106 having damaged its blast doors, as it had traverse SCP-079's chamber during the breach. Unbeknownst to the rest of the site SCP-079 is actually keeping the blast doors shut.

Later on the same day as SCP-106's breach, Subject D-9341, along with 2 other Class-D Personnel, are pulled from their cells in order to perform a test involving SCP-173.

Along the way to the testing chamber, a scientist can be overheard talking to someone else about the SCP-106 breach. The scientist mentions never hearing of an Agent Skinner and reveals that Dr. L. had been shaken up after the breach, causing him to have auditory hallucinations.

D-9341 is then taken to SCP-173's containment chamber, where the 2 other Class-Ds are waiting. As the testing is about to commence the remote control door system and electricity begin to malfunction. Shortly after, SCP-079 starts a site-wide containment failure, causing several Euclid and Keter SCPs to breach containment. The site is then immediately put under lockdown and Nine-Tailed Fox operatives are sent into the site shortly afterwards to re-contain the escaped SCPs and terminate any rogue Class-Ds they encounter.

Along the way, the player discovers a note in Dr. Maynard's office stating "YOU MADE IT SO EASY, NICE WORK FOUNDATION", with 'it' referring to the containment breach. SCP-106's corrosion can also be found in the office. This, along with the fact that a document showing the new passcode to Dr. Maynard's office can be found in the Pocket Dimension, leads to the assumption that he was abducted by SCP-106.

Several notes left by Dr. L. reveal that he had begun to go insane after the breach had started and encountered SCP-106 on multiple occasions, before being abducted by it as well. 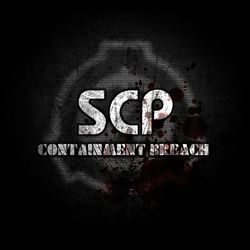 The image used on the game's end screen.

Currently, there are 4 endings that the player can reach. Each ending plays a unique audio recording or radio transmission on the end screen between personnel discussing events that took place after the game ended.

If D-9341 does not contain SCP-106 upon entering Gate A, SCP-106 will attempt to break out of the facility at Gate A, but will be shot by the H.I.D. Turret, forcing it to retreat to its Pocket Dimension. D-9341 will be forced to take the stairs on the left side of the exit while this is happening, as there are several MTF units and apaches deployed around the area that will be distracted by SCP-106 until it retreats. Upon taking the stairs downwards, D-9341 will find a door that leads to a service tunnel. At the same time several MTF units will spot D-9341 and pursue him into the tunnel.

Upon getting halfway through the tunnel, three Chaos Insurgency operatives warp in front of D-9341, telling him that they know too much to be killed. The soldiers will then warp him away and collapse the tunnel on a set of MTF units entering it, trapping them inside. It is unknown as to what the Chaos Insurgency plans to do with D-9341.

If D-9341 contains SCP-106 before exiting through Gate A, then the MTF units will immediately engage him and command him to halt, before announcing they have found a Class-D. After being taken by the MTF units, the game will then end.

The end screen plays a recording of a testing log in which a scientist discusses D-9341. It mentions D-9341's ability to predict and overcome hazardous threats that the containment breach produced. The log concludes with the scientist mentioning that classification of D-9341 as an SCP subject is being considered.

Upon entering Gate B, a voice over the intercom will announce that SCP-682 has broken out of the facility in that area and that they will be detonating the alpha warheads in 90 seconds.

If D-9341 has not turned off the Alpha Warheads in the Warhead Silo before he reaches Gate B, a siren will sound and a bright flash from the warhead's explosion will cover the screen at the end of the countdown. D-9341 dies in the explosion.

The end screen plays a radio transmission of an operative from helicopter OH-6 requesting the deployment of an MTF unit to scout for remains at ground zero. However, the transmission is cut-off mid sentence as a large roar is heard, indicating that the nuclear blast was unsuccessful in destroying SCP-682.

If D-9341 has turned off the Alpha Warheads in the Warhead Silo, the nuclear detonation will not occur and the intercom will order all MTF units to head back to the gate to handle SCP-682. Following the announcement, an unidentified MTF group (presumably Cloud Nine), or another Apache will locate D-9341 and terminate them, ending the game with a transmission clarifying that a stray Class-D has been terminated.

It is unknown as to what happens after any of the endings, but judging by the fact that quotes from personnel who are cleaning up the facility are seen whenever the player dies, it is assumed that the containment breach was eventually resolved.

In the second ending at Gate A, it is safe to asume the scientist is referring to the players ability to respawn. This will most likely result with the player obtaining a SCP status, although it is unknown how/if he will be contained.