The Pocket Dimension is a surreal realm where SCP-106 has complete control and takes its victims to. It is a bizarre, green-lit, labyrinthine place. 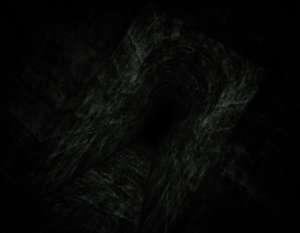 The Pocket Dimension can only be accessed by SCP-106, along with any prey it takes. Its laws and reality are unlike our own. SCP-106 will seemingly "toy" with its victims for an extended period of time before [REDACTED] them. Here, SCP-106 seems to express full control of the realm's time, perception, and laws.

The player can arrive in the Pocket Dimension if SCP-106 catches them, or they could get teleported there as a side effect of the strange bottle. Falling into one of the sinkholes that can occasionally appear in either the T-shaped or four-way hallway will also transport the player to the Pocket Dimension.

The Pocket Dimension is designed with aged mossy stone. The player cannot sprint in this dimension and their health will slowly deteriorate, causing them to start bleeding until they either escape or die. Throughout the dimension, the player can find messages on the floor left by SCP-106, most of which are directed towards the player.

While trying to find a way out, the player will likely find other rooms in the dimension. These include an open area with large columns, two long stone paths with giant flying rocks, a "throne room", a room filled with box-like coffins, a trick room, a trench-like area with a 'Plane' flying over it, and an exit room.

Once taken to the Pocket Dimension, the player will start off in an intersection of hallways with a number of ways to proceed. The height of this room, including the height of the doorways, tends to shift, expanding and contracting at a slow rate. If the player searches carefully, they can find a note that has the access code to Dr. Maynard's office, which is randomized each save.

SCP-106 will wander around this room in a counter-clockwise pattern through the walls of the hallways. Physical contact with it in this dimension results in instant death. After it performs 3 full rotations around the map it'll head straight towards the player if they are still in the intersection.

Upon proceeding down any of the hallways in this room, the player has a chance of either escaping back to the facility, or being teleported to another area of the dimension, sometimes being shifted to a different part of this room. The player should choose carefully, as one of the halls may lead to the player's death.

The player also has a chance of being taken to a four way intersection. One path leads to the coffin room, one leads to the throne room and two lead to stone paths.

The player has a chance of being transported to an area with large columns standing in the abyss of the dimension. The player starts off on one of the pillars and has to descend via small outcroppings that they drop down onto. At the bottom of the pillar is a small path which the player can cross, leading towards a well that'll transport them to a different room.

Time is of the essence, as SCP-106 (whom is floating upside-down a few pillars away) will teleport to adjacent pillars, coming closer to the player. Every time SCP-106 teleports, the player is forced to blink.

Two of the hallways in the four way intersection lead to a narrow walkway with a large pendulum flying across it in a figure 8 pattern. The player has to time their pacing perfectly to avoid being demolished by the pendulum. This can be very difficult because the player cannot sprint, so it is likely that the passing pendulum will hit the player and kill them. Should the player make it past the pillars and down the hole at the end of the path, they will be transported back to the first intersection.

The fourth area that can be reached from the four-way intersection is what is assumed to be SCP-106's "prison", where the player can see a number of large box-like objects perched along the walls. An awful wheezing, coughing and faint whispering can be heard in the room, though no source seems to be visible.

On the ground is a message that obscurely reads "My name is not 106".

While roaming in the Pocket Dimension, the player has a chance of being taken to a cylindrical hallway that's visually similar to the metal corridors, making it appear as though the player has been teleported out of the dimension. However, when either of the two doors are opened, a black void is revealed. If the player walks out of the hallway, they will fall back into the Pocket Dimension, usually into either the throne room or one of the two stone paths.

One of the paths in the four-way intersection leads to SCP-106's "throne room", where upon entering the player will see SCP-106 perched atop a large throne-like column. The player is only able to see its eyes and upon approaching the throne, the camera is forced up in its direction. Once the room has been entered, the doorway is blocked by a wall, preventing the player from going back the way they came.

After the player kneels in front of SCP-106 in the throne room, they will be transported to the trench area. The trench itself is reminiscent of World War I trenches, with several wooden bridges lining the chasm. There are also several rocks and coffins which can be seen floating around the area.

Once the player reaches the end of the trench, there will be a well which will lead them to the exit room.

The entire sequence is a reference to the tale "The Young Man", which details the origins of SCP-106 as being a World War I veteran. This is further exemplified by the whole trench set-up of the area, as well as the 'Plane' creature, which in addition to using the sounds of distorted WWI-era aircraft, appears to have a similar design to that of an airplane or bird. Its eye opening most likely represents a plane's cargo hatch opening to shell the trench. The well which appears at the end of the area is a reference to the sinkhole from the tale.

The exit room is a short, cylindrical hall containing one doorway. It appears as corroded as the walls and floors of the four way intersection and throne room, and is accessed by going down a random corridor in the first intersection the player starts in. The player will be teleported to the middle of the hall, facing the door. Once the player passes through the doorway and keeps on walking through the darkness, they will be teleported to the basic office.