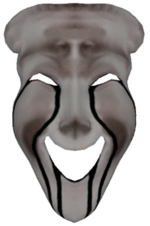 SCP-035, referred to as the "Possessive Mask", is a dangerous SCP object that can be found in SCP - Containment Breach.

SCP-035 appears to be a white porcelain comedy mask, although, at times, it will change to tragedy. In these events, all existing visual records, such as photographs, video footage, even illustrations, of SCP-035 automatically change to reflect its new appearance.

Subjects close to SCP-035, or in visual contact with it, experience a strong urge to put it on. When SCP-035 is placed on the face of an individual, an alternate brain wave pattern from SCP-035 overlaps that of the original host, effectively snuffing it out and causing brain death to the subject. Subject then claims to be the consciousness contained within SCP-035. The bodies of “possessed” subjects decay at a highly accelerated rate, eventually becoming little more than mummified corpses.

SCP-035 has proven to be highly sadistic, prompting some to commit suicide and transforming others into near-mindless servants with linguistic persuasion alone. SCP-035 has stated that it has intimate knowledge of the workings of the human mind and implied that it could change anyone's views if given enough time.

SCP-035 can be heard requesting for help over the radio, stating that it knows its way around the facility and that it can help the player escape.

SCP-035 can be found in its containment chamber, attached to the face of one of the Foundation's scientists. When the player enters the control room adjacent to the chamber, SCP-035 will stand up and begin to converse with them. It will pace the room and ask to be released from confinement, stating that if the player opens the door, then it can assist them in escaping the facility. It will also attempt to prove that it's trustworthy by giving the player the passcode to the storage room containing a few helpful items.

If the player activates the gas valves, SCP-035 will begin coughing and gagging while pleading with them to turn it off. Leaving the gas valves on for a long period of time will cause SCP-035's host to die.

After a few seconds SCP-035 will re-animate itself and criticize the player for their actions, stating that a Class-D like them would not live to make it out.

If the player opens the chamber door, SCP-035 will tell them one of 3 things depending on the player's actions. If they release SCP-035 immediately, it will mention that SCP-079 is in control of the facility. If they release it after activating the gas valves but deactivate it before angering SCP-035, it'll mention that Gate A is the player's best chance of escape. If they attempt to kill SCP-035 with the gas, it'll state that SCP-012 is actually a map, which is a false claim.

Once SCP-035 leaves its chamber, the player is able to enter the room. However, hostile tentacles will rise up from the ground inside the chamber and attack the player if they are close enough. If the player is wearing the heavy hazmat suit, however, they will not be harmed.

SCP-035's host can later be found dead in another location of the facility. If the player approaches the corpse then a tentacle will rise out of it.

Heard over the radio, looking for help

Upon noticing the player

If the player is idle for a long period of time

After the player has entered the locked storage room

If the player activates the gas

If the player turns off the gas before 035 "dies"

If the player opens the door for SCP-035