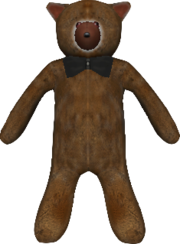 SCP-1048, also known as "Builder Bear", is an SCP object in SCP - Containment Breach, which appears in the form of an easter egg.

SCP-1048 is a small teddy bear, approximately 33 cm in height. Through testing, composition of the subject revealed no unusual qualities that make it discernible from a non-sapient teddy bear. Subject is capable of moving of its own accord, and can communicate through a small range of gestures. The subject regularly shows affection to individuals in ways found endearing by most people. Affection is usually given in the form of a hug to the lower leg, but subject has also been observed dancing, jumping in place, and in two separate events it has even drawn child-like pictures for personnel.

SCP-1048 can creating replicas of itself using various materials. The most notable of these replicas is SCP-1048-A.

SCP-1048 can be found wandering aimlessly around the large testing chamber. It can also occasionally be seen dancing on a desk inside the observatory room of the checkpoint rooms. If the player looks away from it and then looks back, it will be gone.

SCP-1048 can also be encountered in the three-way gas catwalk, making drawings with a pen and paper. If the player walks up to it, it will hold up a drawing that it made, which the player can then pick up. Each drawing represents D-9341 in some form of peril. As soon as the player picks up the drawing SCP-1048 will disappear. 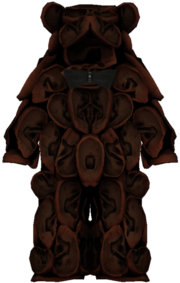 SCP-1048-A is similar in appearance to SCP-1048, in that they are both teddy bears with a black bow tie. The main difference however is that SCP-1048-A is comprised almost entirely out of human ears, with a wide hole near the head region sufficing as a mouth.

When a person is nearby, it will emit a high-pitched shriek, that causes intense pain in the eyes and ears of everyone in a 10-meter radius. Directly after that, ear-like growths start to grow on everyone in a 5-meter radius of the subject, covering their bodies in less than 20 seconds. After the victims have been covered in ear-like growths, they will die from asphyxiation within 3 minutes due to these growths also manifesting in their mouths.

SCP-1048-A can sometimes be encountered in the two-way hallway. If the player comes into contact with it, it will begin screeching, causing the player's vision to shake. If the player remains close to SCP-1048-A for too long, ear-like growths begin to form all over their body, causing them to suffocate.

It is advised that the player runs quickly through the room or avoid any that SCP-1048-A is roaming in and seek an alternate route. If the player manages to get past it without dying, it will despawn. It is, however, possible to have multiple rooms occupied by SCP-1048-A in a single game.

The following is a gallery of every possible drawing that SCP-1048 can give to the player. They were all created by members of the Undertow Games forum on a collaboration thread, in which Regalis stated that he needed child drawings for a scripted event he was working on.