The following is a list of content that was either scrapped or went unused in SCP - Containment Breach. 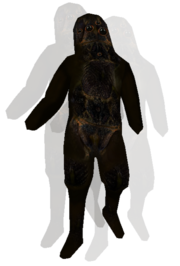 SCP-178 is a pair of white stereoscopic glasses with a rectangular white cardboard frame and lenses of transparent blue and red plastic. The item exhibits no unusual physical properties apart from a slight discoloration of the cardboard consistent with age. When worn, the wearer begins perceiving large bipedal entities in addition to its ordinary surroundings.

SCP-178 could be found inside its containment chamber, sitting atop a wooden podium. Upon equipping it the player would start to perceive instances of SCP-178-1 around the facility. Taking SCP-178 off would cause the instances to disappear, however should the player have agitated the instances, they would continue to attack the player for a short period of time before ceasing their attack.

SCP-178 was originally part of the Box of Horrors third-party mod for the game made by forum user Juanjpro. It was added to the game in v1.1 before being removed in v1.3.10. 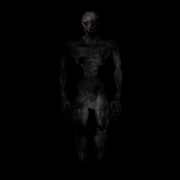 SCP-513-1 was a byproduct of SCP-513, also known as "A Cowbell". It was originally included in the game's initial release, before being removed then subsequently re-added much later with different mechanics. This section details its original function.

From v0.1-0.2, SCP-513 could be heard ringing over the intercom at random points in the game. After such, the player would begin to see SCP-513-1 occasionally in their peripheral vision. Attempting to move closer to inspect it would cause it to immediately disappear.

Regalis eventually removed SCP-513-1 from the game, stating that "SCP-513 nullifies any chances of the player escaping and surviving if they made it to the ending"[1]. Since v0.2.1, SCP-372 has acted as a replacement for SCP-513-1. It was then later re-implemented in v0.8 with improved mechanics. 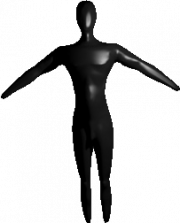 SCP-650, also known as "Startling Statue", is a black colored humanoid statue with no facial features. It is completely smooth and its default position is facing skyward with arms stretched out. If it is not being observed, the statue has the potential to relocate itself directly behind the person who viewed in a threatening pose, causing a "fight-or-flight" response in subjects.

SCP-650 was proposed by a user on the SCP - Containment Breach forums. After reading the proposal, Regalis considered adding it into the game if a model was made due to the fact that it could be easily implemented. Progress for the project became very slow and eventually fell apart altogether due to overall lack of morale from fellow members of the community. Inevitably, all progress came to a halt and no attempts have been made to finish the model. The project is thus presumed cancelled. 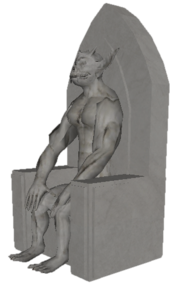 SCP-689, also known as "Haunter in the Dark" is a small, green soapstone statue. It is completely inert for as long as it is being watched by at least one human being. Normal behaviors such as blinking do not appear to interrupt the "watching" for this purpose, but any lapse in attention, however momentary, renders the observer vulnerable. As soon as SCP-689 is unobserved it vanishes from its current location. Within 15–20 seconds one person who has previously viewed SCP-689 dies instantaneously, SCP-689 reappearing on top of their remains. If no previous viewers are presently alive, it reappears in the same place as previous.

A model and containment room was created for SCP-689 in the hope of better utilizing the eye mechanics in the game. It was intended that whenever the player made eye contact with SCP-689, they would have to maintain it. Should they take their eyes off SCP-689, it would instantly kill them. Regalis (while in favor of better use of the eye mechanics) deemed SCP-689 "too powerful and over-the-top", and decided on not including the SCP in the game. 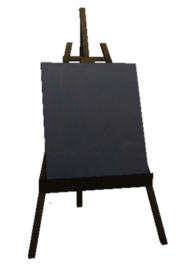 SCP-1074, or "Stendhal's Nightmare", is a portrait-sized oil painting on canvas, produced by an unidentified artist. When it is viewed by a human being, the observer immediately begins to exhibit physiological symptoms similar to the onset of Stendhal syndrome, including increased heart rate, sweating, and vertigo. The individual viewing SCP-1074 will attempt to vividly describe the image they are seeing to anyone present, frequently describing it as the greatest or most moving work of art they have ever seen. Statements from persons so affected describe it not as a blank gray canvas, but as a highly detailed painting of an inconsistent nature.

Once viewing SCP-1074, the subject will not willingly turn their gaze from it unless physically restrained, and will attempt to convince anyone else in their presence to look at it as well. Subjects will become rapidly disoriented and detached, attempting to discuss philosophical questions raised by the painting, of an increasingly esoteric nature as exposure continues. Within 3-5 minutes of first exposure, the subject becomes catatonic and ceases responding to outside stimuli. The subject will remain stationary and die of natural causes within several days unless physically tended to.

In-game, SCP-1074 itself would display an image of D-9341 on his knees, crying. Should the player be wearing SCP-714 or a pair of night vision goggles, the painting's effects would be negated and it would only display an empty canvas.

Upon viewing SCP-1074, the player would begin forcibly walking towards the painting. Upon being directly in front of the painting, D-9341 would comment on how well crafted the art was, while at the same time questioning why he is in it.

After staring at it for a while, D-9341 would suddenly realize the meaning behind the image, which was presumably reflecting the crime he committed based on his responses to it. He would immediately begin reflecting on his actions and start regretting them. Afterwards the message "You feel weak." would display and the screen would fade to black. The death message revealed that D-9341 was shot to death upon being discovered in the chamber.

SCP-1074 was originally part of the Box of Horrors third-party mod for the game made by forum user Juanjpro. It was added to the game in v1.1 before being removed in 1.3. Presumably, 1074 was replaced by SCP-1162 as it provides a better implementation of D-9341's history.

The unused model, with the texture of the old MTF applied to it.

This model was originally intended to be used as the model for the Chaos Insurgency, or possibly a variant of the MTF, in order to distinguish between members of the task force. The model is similar in appearance to the old MTF models, with the exception of a gas mask in place of a visor. The model can be found in the game's files from v0.6-0.6.6 and can be found in the directory SCP - Containment Breach/GFX/npcs/mtf2.b3d. This should not be confused with the new MTF model, which uses the filename MTF2.b3d from v1.0 on.

This unused conference room has been in the game's files from v0.1-0.6.6. It can be found in the directory SCP - Containment Breach/GFX/map/conference.x.

Some notable things in this room include the fact that it uses the default chair, table, and cabinet models found in the 3D World Studio editor. The table has nothing on it except a red binder. There's a projector on the ceiling pointing to a blank whiteboard, on the whiteboard is an SCP file attached to it via magnets. It also uses an earlier version of the door which has only appeared in early SCP - Containment Breach demonstration videos, which means that this room was only used in the indev versions of the game and was scrapped before the initial release.

The medical bay was a room originally featured in the Box of Horrors Compilation that was planned to be implemented in the game in v1.1. Regalis had even released a prerelease screenshot of the room a month before the update came out.[2] When the update was released, the medical bay was not added to the game, although there do exist a few leftover textures of it in the game's files. Regalis later clarified that he had removed the room because he felt that it offered nothing unique to the gameplay.

It has since been re-added in v1.3.3 in its original form, with the except of the SCP-049-2 instance being replaced with a SCP-008 infected human.

SCP-178's containment chamber requires a level 3 keycard to access. The room is largely empty of anything except for a few blood splatters on the ground and SCP-178 resting atop a wooden pedestal.

This room was intended to house SCP-689, but since it was never implemented, the chamber went unused. It was in the game's files from v0.1-0.6.6 and can be found in the directory SCP - Containment Breach/GFX/map/statueroom.b3d.

Test Room 4-A (commonly referred to as SCP-1074's testing chamber) is comprised of four rooms. The first two rooms are separated by a locked door in the outside hallway, forcing the player to go through the chamber. The room on the right-hand side of the area is an observation room containing a containment notice and a readable monitor on a control panel. The left-hand side of the area houses SCP-1074 itself, signified by being the most dimly lit room out of the four. Its document being found on the floor in a door frame leading to one of the entrances/exits.

Upon entering SCP-1074's room, the player should avoid looking at it, as to avoid its influence. Equipping SCP-714 or a pair of night vision goggles will negate its effects, making the room safe to travel in.

Based on a pre-release screen for v1.1, the SCP-1123 scenario would have been slightly different.[2] The screenshot depicts a PoW inside a room, with a Nazi officer overlooking the room from a window. Given that the scenario is meant to take place during the Holocaust period, is it presumed that this sequence would have involved the player being killed in a gas chamber.

There's an unused Gate B ending found in the game's files from v0.5 and onwards in the directory SCP - Containment Breach/SFX/EndingB1.ogg. The ending apparently would've been triggered when the player is killed by SCP-173 before having left the tunnel. The ending audio is of two personnel noticing the player at the elevator's entrance, as well as seeing them get killed by 173.

As of now, SCP-173 does not appear at Gate B. This ending was cut for unknown reasons.

The ending in which the player is captured by MTF units was originally longer and included many more references to the fact that the player is in actuality controlled by a gamer. It was shortened by Regalis because he felt that the ending wasn't subtle enough. The full ending audio is as follows:

Subject appears to be detached from all human interaction, often breaking focus from people he is conversing with and performing odd actions such as jumping up on the highest platforms in the room, picking up and throwing objects across the room, and dropping items it was carrying on to the nearest person's head. Researchers are encouraged to ignore this behavior in order to discourage it.

Subject often goes in to brief trance-like states when startled, freezing up for periods lasting up to several minutes. After the time has passed, the subject will resume normal activity with no outward reaction to what has just happened.

Subject demonstrates extraordinary luck and complete mastery of even the most fatal of circumstances and an uncanny ability to predict even the most unpredictable of hazards, almost as if it has performed these impossible tasks several times before.

Further testing is required to determine whether the subject should receive SCP classification."