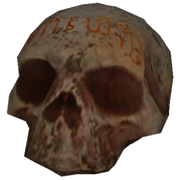 SCP-1123, or "Atrocity Skull", is an SCP object encountered in SCP - Containment Breach.

SCP-1123 is a human skull missing the lower mandible and all its teeth. When a subject touches the surface of it they will experience a dissociative fugue state. Symptoms of the fugue persist for ninety minutes to six hours.

The fugue is characterized by confusion, disorientation, and adoption of a new identity and memories which consist of knowledge, including language, previously unknown to the subject. During the fugue the subject will lose all memories of their prior identity.

As the fugue state subsides, the subject will regain memories of their prior identity, but will also retain memory of the new, imprinted identity and all the knowledge associated with it.

SCP-1123 can be found inside of its containment chamber. When the player attempts to pick it up, they will adopt the identity of what can be assumed to be a PoW inside a Nazi concentration camp, during World War II.

The first scenario the player witnesses is them being inside a prison cell similar to the Class-D cells, albeit with concrete walls and a wooden door. A propaganda leaflet can be found on the bed, presumably after having been sneaked in by the PoW. After a short period of time, a Nazi officer will open the door and order the player to step out of the cell. Upon leaving the cell, the player will be taken back to SCP-1123's containment chamber, ending the first scenario.

The second scenario is triggered by attempting to leave the chamber, as the door will instead lead the player to a series of hallways, with the same concrete lining the walls. Eventually the player will come across a closed wooden door. Opening it will reveal the officer, who will abruptly turn around and aim his Luger at the player. They will then be taken back to the hallway outside SCP-1123's chamber.

After a few seconds the player will be taken back to the scenario, only this time the player is lying on the floor in a pool of blood. The officer (who presumably was the one to critically wound the player) will be standing over the player, taunting them. He will then shoot and kill them, making the screen go white. The player will then be transported back to the hallway outside SCP-1123's chamber, ending the final scenario.

Upon the officer opening the door in the first scenario

The officer standing over the player in the final scenario