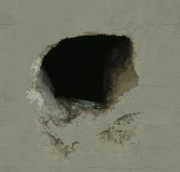 SCP-1162, referred to as "A Hole in the Wall", is an SCP that can be found and used by the player in SCP - Containment Breach.

SCP-1162 is a hole in a cinderblock wall. Its anomalous properties are activated when a sentient being reaches into the hole to the depth that the girth of their arm allows. At this point their fingers touch a solid surface similar in feel to the current location of SCP-1162, and they discover an item small enough to fit through the hole below their fingertips.

These items have universally been recognized as something that the user has lost, or was searching for at some point during their life. However, upon retrieval of the item, another item will vanish from the person of the subject. In addition, any object placed into SCP-1162 will disappear as soon as it is no longer in contact with a person.

SCP-1162 is capable of giving the player up to 5 "'nostalgia items". They appear to be items which hold historical significance to D-9341, as he will sometimes comment on them and how it pertains to his past life.

The coin is an item that behaves identically to the Quarter. The only difference being that upon selecting it in the player's inventory, Blue Feather will briefly play.

The movie ticket is self-explanatory. The title of the film on the ticket, "Run", is a reference to Containment Breach: Run. Additionally, the name "Lotims" can be seen at the top left, although it is mostly scorched out.

The old badge appears to have been a badge that once belonged to D-9341. It also partly reveals his full name, "Benjamin Oliver ___ker". Some suggest the missing part of the name is "Walker" The QR code at the bottom left reads "spiral gestalt" four times.