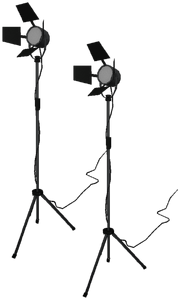 SCP-205, referred to as the "Shadow Lamps", are harmful SCP objects encountered in SCP - Containment Breach.

SCP-205 is a pair of flood lamps used in photography. If the light continues uninterrupted through any matter, otherwise casting no shadow, each lamp will display an unidentified young woman's shadow upon any flat white surface, such as the projection screen in their containment chamber. The shadow appears to re-enact a specific series of events leading up to the woman's death.

When supplied with steady power and maintained, the SCP-205 pair will go through a six month cycle that ends on April 30th and October 31st of each year. It will shut off at midnight on the final day of each cycle. During the last month of the cycle in April and October, shadows distinct from the young woman are displayed. These shadows all have exaggerated nude male physiques and horns projecting from the cranium although no phallus is ever observed. After the second week of the month the woman will take photographs of one or more of the horned shadows during one of their outings, always with a non-digital camera that has been consistent through all observed viewings of the SCP-205 cycle.

During the final week of the month the woman appears to develop the film in her camera for the first time since photographing the horned shadow(s). Her reaction to the photographs is one of shock and horror, and her movements afterward suggest that she attempts to flee and seek shelter behind a locked door, presumably in her home. There she is encountered by multiple instances of the horned shadow figure which assault her repeatedly for the remainder of the week. It is strongly implied that she is killed during this process although the assaults will continue until the end of the cycle.

The SCP-205 pair can be found inside their containment chamber, facing and illuminating a projector screen. A shadow of a woman is cast on the wall, displaying her in various suggestive poses. Eventually the image will change to display horned male figures idly standing around. Shortly after the figures will begin to attack the shadow woman until she dies.

Upon any of the male figures appearing, the door to the chamber will open. Once the player enters the room all three figures will appear and stare at the player, followed by the doors closing and the lamps turning off. After the lights go out the figures will turn invisible and begin attacking the player until they die.