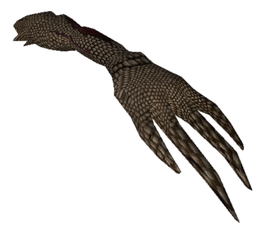 SCP-682, also known as "Hard-To-Destroy Reptile", is an SCP that can be encountered in SCP - Containment Breach.

SCP-682 is a large, vaguely reptile-like creature of unknown origin. It appears to be extremely intelligent and was observed to engage in complex communication with SCP-079 during their limited time of exposure. SCP-682 appears to have a hatred of all life, which has been expressed in several interviews during containment.

SCP-682 has always been observed to have extremely high strength, speed, and reflexes, though exact levels vary with its form. SCP-682's physical body grows and changes very quickly, growing or decreasing in size as it consumes or sheds material. SCP-682 gains energy from anything it ingests, organic or inorganic. SCP-682's regenerative capabilities and resilience are staggering, and SCP-682 has been seen moving and speaking with its body 87% destroyed.

SCP-682 can be heard within the Site, roaring loudly, followed by gunfire, continued roars and heavy thrashing, which causes the facility to briefly shake.

SCP-682 appears physically as it and the player both reach Gate B. SCP-682 is seen throwing a limb up into the air and destroying an attack helicopter along with presumably several APCs (a large vehicle can be heard rolling up before 682 begins its rampage) and other armed forces, as well as destroying the blast doors and area around the main exit.

After the security forces at Gate B fail to impede SCP-682's escape, the Alpha Warheads are authorized to be engaged and are set off (depending on if the player had deactivated them previously).

Once the nuclear blast has settled, several recovery helicopters are dispatched to find possible remains. None are found, and a radio operative from helicopter dubbed OH-6 requests the deployment of an MTF unit to scout for remains at ground zero. However, the transmission is cut-off mid-sentence as a large growl is heard, indicating that the nuclear blast was unsuccessful in destroying SCP-682.