SCP-860, or the "Blue Key", is an SCP object that can be obtained in SCP - Containment Breach.

SCP-860 is a dark blue key of unremarkable shape. It can fit in any door lock that requires a key located in the area of the given coordinates, and will function identically to the correct key for that lock. It only works on door locks, and only if they are attached to a door; it will not work on any other type of locking device.

When SCP-860 is used to unlock and open a door, the door does not lead to its usual destination. Instead, it opens into SCP-860-1. 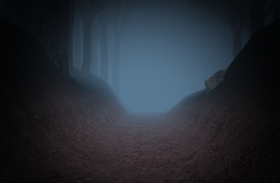 SCP-860-1 is a small forest clearing centered on an 80 cm wide footpath surrounded by a grove enveloped in blue-colored mist.

A number of anomalous events and creatures have been sighted in SCP-860-1.

Upon being brought into SCP-860-1, the player will be faced with a dirt path in front of them. The path itself is linear with a few forks in the road along the way, with one of the paths leading to a dead end. Several notes left by Izumi Junko can be found along the trail. In addition, she can occasionally be seen in SCP-860-1, peering at the player with glowing yellow eyes from behind the trees.

Eventually the player will reach the other door, but SCP-860-2 will constantly be stalking them throughout the entire area, so it is advised that the player keep an eye out for it. 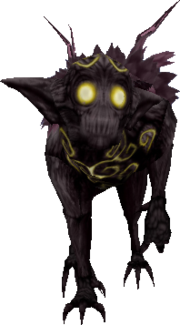 SCP-860-2 is a large feline creature that walks on four legs with bark-like skin and dull gray vegetation covering most of its body. It has a long, broad tail, pointed ears, and bright yellow symbols on its chest and head. In addition, its eyes are bright enough to be seen in 860-1's dense fog. It is predatory in nature and will display hostility toward anything within 860-1.

SCP-860-2 will stalk the player throughout the forest. It can occasionally be seen watching them through the trees. If the player tries to approach 860-2 while it is docile, it will dash away back into the forest.

If the player takes too long to maneuver through the forest, SCP-860-2 will jump out from the trees and onto the path to chase the player and try to kill them. It runs at the same speed as the player and can kill them in one strike, so it is almost impossible to avoid SCP-860-2 once it is agitated.