Scientists, also referred to as Doctors, are SCP Foundation personnel who research and study SCP artifacts. They act as minor characters in SCP - Containment Breach.

Scientists form the backbone of the Foundation; they work on a wide range of roles from standard research to more specialized fields. They are often seen wearing white, short-sleeved buttoned shirts with matching colored pants, red dotted ties, and brown shoes.

Most of the scientists encountered in SCP - Containment Breach are killed shortly after the breach begins through various ways. Any other personnel are not seen from the player's perspective, as the site is barren by the time they get deeper into the facility.

Various scientists are seen throughout the game. Some of them only appear in short, scripted events, while others take on recurring roles. This section covers the former, with more significant scientists being given their own section further down in this article.

In the intro office, a scientist can be seen in a cubicle talking to someone else over a computer about SCP-106's breach prior to the game.

A scientist can be seen in the storeroom discussing exit routes with a janitor until they are both killed by SCP-173 during a split second blackout.

There is a chance that the player will encounter a scientist attempting to go through a Tesla coil hallway, only to be shocked and killed by it.

When the player comes across a t-shaped hallway, there is a chance that SCP-106 will eject a scientist from the Pocket Dimension, via a black corrosion spot on the ceiling. The scientist's corpse will always fall from the ceiling and have suffered heavy corrosion damage from SCP-106.

After becoming fully infected with SCP-008, a small cutscene will play out showing D-9341 approaching and consuming a scientist while he pleads for mercy.

A dead scientist can be randomly encountered in SCP-970. On some occasions it will be floating and rotating in mid-air.

In SCP-035's containment chamber, a possessed scientist can be found in the holding chamber, wearing SCP-035.

The scientist talking to another over the computer in the intro

The scientist escaping in the storeroom

The scientist seen after becoming fully infected with SCP-008

Security Chief Franklin Carey is the head of security across the entire facility. He is arguably the most prominent minor character throughout the entire game.

While the player is being escorted to SCP-173's containment chamber, the site's PA System will announce that Franklin needs to report to the chamber immediately. While being escorted through the intro office, the player can glimpse Franklin walking below the catwalk.

Franklin will appear in SCP-173's chamber, on the other side of a glass window giving instructions to the Class-D personnel. Upon entering the chamber, Franklin will instruct the Class-Ds to begin testing on SCP-173. Should the player not comply, he will order the attending guard to terminate them.

When inside the housing chamber, Franklin will hesitantly note that the door system is malfunctioning, before being abruptly cut off by the blackout.

Later when returning to the intro office, Franklin can be seen warning Agent Ulgrin about SCP-173 standing behind him. Ulgrin will then turn around to stare at it and escape the room with Franklin.

Franklin is later heard at Gate A to announce SCP-106's arrival, and orders them to fire the H.I.D. Turret to impede its movement, a move of which is successful.

During the testing of SCP-173

When the player refuses to enter the containment chamber

Upon seeing SCP-173 in the intro office

At Gate A, when SCP-106 breaches the facility

Throughout the game several different personnel can be heard broadcasting over the intercom.

Once the breach starts, an unknown character will announce that the site is experiencing multiple containment breaches and is therefore being put on full lockdown. This message is repeated continuously over channel two of the radio.

A person, who is presumably the unit adviser of Nine-Tailed Fox, will announce the task force's arrival once the player reaches the Entrance Zone.

Another person heard over the outdoor public address system at Gate B will announce SCP-682's escape as well as the detonation of the Alpha Warheads.

Once the breach starts

After Nine-Tailed Fox enters the site

After Nine-Tailed Fox requests a Tesla gate to be disabled

After Nine-Tailed Fox requests a scan of the security cameras.

After scanning the cameras

After scanning the cameras and they locate no survivors, release the following line

The broadcast is then followed with one of three lines

Should the player possess an SCP in their inventory then this line is played instead.

This broadcast is played after either outcome

As SCP-682 escapes the facility through Gate B

When the alpha warheads fail to launch 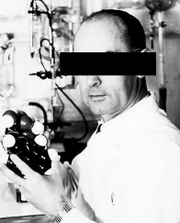 Doctor Charles Gears' office can be found in the doctors quarters, but there is currently no way to enter it as of now. His portrait can be seen hanging on the wall of the shared conference room. The player can also find a note by Dr. Gears reminding personnel to designate SCPs by their number and not their 'nicknames'.

Doctor Harp is described as a man obsessed with science who is willing to go to extremes to accomplish his goals. He believes a containment breach is the perfect chance to study SCP objects in a less controlled environment.

Dr. Harp is not seen in-game, however, he can be heard on channel five of the radio having a conversation with Security Chief Franklin. He will request that Dr. Harp give him the security code to his office, so that they can access the Incident Report SCP-106-0204 through the facility intranet. The security code to his office can be discovered here, and can then be accessed by the player.

Another conversation can take place in which Dr. Harp attempts to summon Dr. Maynard to Gate B, only to be contacted by Agent Ulgrin, who reports that Maynard is still inside the facility.

Dr. Harp is also responsible for writing the plans for the Omega and Alpha Warheads, as well as the note in SCP-914's containment reminding personnel to not put organic matter through SCP-914.

Doctor L. (full name unknown) is a Foundation doctor who in the midst of the breach, left several notes across the facility which the player can read. He is depicted as slowly becoming more insane as the breach progressed due to his anxiety towards SCP-106.

According to a conversation the player can overhear in the intro sequence, SCP-106's breach prior to the game had an impact on him, causing him to start having auditory hallucinations. The notes reveal that Dr. L. slowly started going mad after the containment breach start and, judging from the corrosion and blood found on a few of the notes, it is presumed that he was taken by SCP-106.

The door to Dr. L.'s office will open whenever the player passes by it, unless they have already disabled the remote door control system in the Electrical Center. This is presumably done by SCP-079 in an attempt to kill the player, as SCP-106 will always spawn inside this office.

Assistant Researcher Emily Sharon Ross was a level 2 researcher working for the Foundation, being 22 years old at the start of the game.

Once the containment breach began, Ross got locked inside Containment Room 5 and attempted to contact security for help. In addition, Ross claimed that strange noises were coming from the other side of one of the storage rooms. A personnel responded by saying that security was too busy to dispatch anyone to her location. Shortly after, contact with Ross was lost entirely.

When the player gets within the vicinity of Containment Room 5, they will hear a loud shriek followed by SCP-106's laughter. By the time the player enters the room, Ross is nowhere to be seen, except for her badge which can be found on the floor. This leads to the assumption that she was abducted by SCP-106.

Doctor George Maynard is a doctor who, over the course of the game, is revealed to be the true orchestrator of the containment breach, working as a double agent for the Chaos Insurgency.

The player can find the burnt note that contains the code to Dr. Maynard's office. Due to the fact that this note is in the Pocket Dimension and there are splatters of corrosion in his office, it can be assumed that Maynard was abducted by SCP-106 shortly after the breach started.

Upon entering his room, the player can find a crude note saying "YOU MADE IT SO EASY, NICE WORK FOUNDATION." on the floor, as well as a monitor which displays a conversation with an unknown client, simply stating "It's out".

The timestamp on the conversation coincides with SCP-106's initial breach before the start of the game, at 09:21. This evidence leads to further suspicion that Dr. Maynard was working with someone else to cause SCP-106's breach. As shown in the Incident Report SCP-106-0204 document, the likely candidate for this person is Agent Skinner, who released SCP-106 then escaped the facility while the site was distracted.

After SCP-106 breached, Dr. Maynard took this time to slip into SCP-079's containment chamber and grant it full access to the site's systems. This is revealed through the monitor found in the chamber's control room.

There's also a document in Dr. Maynard's office mentioning the Modular Site Project, a concept initiated by him and the Engineering and Technical Services Department. There are several computer screens throughout the facility pointing out problems and security risks caused by the Modular Site Project, which leads to the suspicion that Maynard started the project in order to make the site more vulnerable to containment breaches.